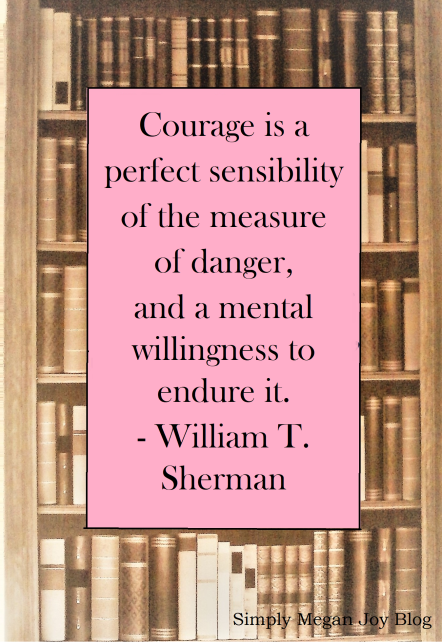 William Tecumseh Sherman was a Union General in the Civil War born in 1820. He is known for his outstanding command of military strategy and in his later life, wrote a memoir which is considered one of the best depictions of the war today.

Some say that fear is the opposite of courage. They say that having courage means that you can no longer be afraid, making it seem as though facing your fears means that you must cast out all fear. However, this doesn’t seem all that logical. In many ways, it is heathy to fear. To fear lightening when out in a field is a good thing. To fear a poisonous spider is also a good thing. Sometimes, fear is just called “smarts!”

I think that William Sherman summed it up quite nicely in one quote. After all, he had many first-hand experiences of fear and courage while serving in the war. He explains that having courage means being aware of the amount of danger ahead and being willing to endure it. I consider this a helpful way to think about fear and courage. Fear is not always a bad thing, and sometimes it even helps us! We needn’t be ashamed of fearing things that should be feared. What makes us brave is knowing the fear and enduring it anyway.

What do you think about fear and courage?

I don't care to hear any argument. Winona Ryder, Trini Alvarado, Claire Danes, Kirsten Dunst, and Christian Bale can never be topped as the best cast the story of Little Women has ever produced. The costumes were divine and insanely accurate, and the script, perfection. You will never change my mind, and no I will never love anything more. Take your 2019 disgrace and never bring it through my door or else I will rant about every. single. inaccuracy in both the fashion and the script. Where are the bonnets?! Why is Meg's hair down, straight, and sideparted at her wedding?! Why the Ugg boots?! Why doesn't anybody's clothing fit?!
🚩Warning: don't read this if you hate medical stuff.]
One day I'm gonna have real fans. You know, the big industrial ones that swivel and have five different speeds. ☺️