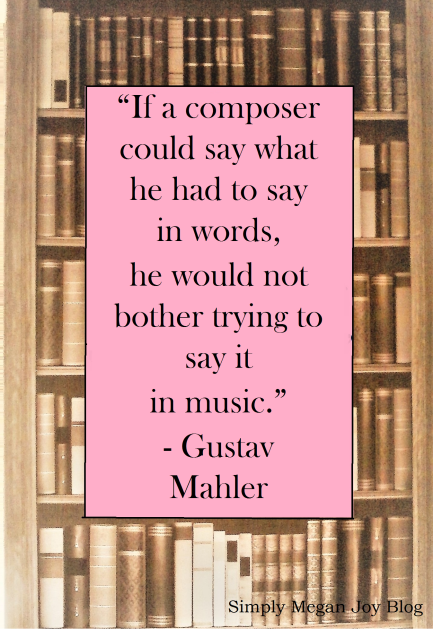 Gustav Mahler was an Austrian composer from the late 1800s and early 1900s known to have stated this bit of wisdom. Being a composer himself, he believed that for some, it is easier to communicate using music than using words.

Every composer creates and has created music for a purpose, whether it’s to produce a joyous sound, a thought provoking melody, a comforting tune to those in trial, or an exciting array of notes for those of adventure! Each song is and was crafted to express a story or feeling that is hard to describe in words. If composers wished to tell their story of emotions and feeling, they could have written books. Many didn’t publish books but instead chose to write a song that would express what they wanted to say.

You know when you’re watching your favorite movie and it comes to the part where the best song begins? Don’t you get that feeling that only music can bring? Whether you feel happy, sad, excited, or scared, the music just seems to be so powerful that it can cause you to feel a certain way. That’s the power of music. It can tell us a whole story without disclosing a word. The rise of a flute, the fall of a cello, and the clash of a cymbal can express emotions and feelings; some that cannot be said in words.

Do you think that music is a way of communication?

What’s a song that moves you unlike any words could?

Yeah, people might look at you strangely, but so what? Wear what brings the most out of life. Don't feel silly going ANYWHERE when you're wearing what makes you, you.
I found this photo of my great aunt a year AFTER I'd taken the photos of me, and I can't stop thinking about the similarities. I was even wearing my grandmother's (my great aunt's sister's) sweater and necklace at the time 😊
👀 Don't get me wrong! I know there are tons of antique treasure to be found in here if you spend enough time searching. I even bought some things: a civil war lantern and a 1950s skirt.